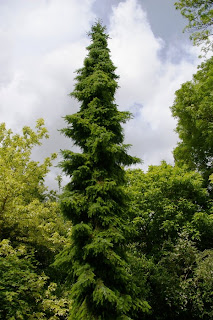 Our Christmas tree this year, just installed, was obtained from a well-known supermarket as a 'Pot grown Omorika.' It would be interesting to know what this mysterious-sounding name conveys to the average Tesco shopper. Like the frequently offered 'Nordmanniana' trees, it is shorn of its generic name (Picea, in this case) but the public seems happy and quite able to use these specific epithets for their Christmas trees. It's interesting, however, that the ordinary Norway Spruce, Picea abies, is never dignified with any name at all - it is just the baseline Christmas tree.

The English name for Picea omorika is Serbian Spruce - perhaps a less than happy name for marketing purposes - on account of its principal occurrence in the Drina River valley in western Serbia, but it does also ocur over the border in Bosnia as well. Now rare there, with possibly only a thousand or so trees left, it is classified by IUCN as Vulnerable, and is now protected. It is a slim-looking tree, with a characteristically slender trunk, with short, somewhat pendulous branches giving it an extremely narrow outline. This makes it of great ornamental value when young, both in the garden and, indeed, as a Christmas tree.

The photograph shows a handsome young specimen in Lord Heseltine's arboretum at Thenford House, growing vigorously upwards and at its peak of beauty, being clad with branches to the ground. As they age they become rather gaunt, though the neatness of the tree is maintained. One such grows on the lakebank at Colesbourne Park. It is the last survivor of Henry John Elwes's expedition of 1900, when he drove (horse and carriage!) 'a long day east of Sarajevo' to see native stands. Wearing both his forester's and hunter's hats, he noted that 'On the steep limestone cliffs..., which are a favourite haunt of chamois, Picea omorika was growing in clumps, and isolated trees occurred among common spruce, Scots and Austrian pine.' He collected seedlings, but had to fell a mature tree to reach the cones (which are always at the top). From these, or perhaps seeds he received later that autumn, grew the old tree at Colesbourne, shortly to enter its 110th year. It is not easy to measure its height, but it is probably about 25 m tall, though the trunk's diameter is only about 30 cm. Fortunately several more specimens have been planted in recent decades by Henry W.G. Elwes, though of less exciting origin, they will at least maintain the presence of Serbian Spruce at Colesbourne.

What happens to our Christmas tree will depend on its state in the New Year, but I have doubts about its identity. Its needles don't show the usual pale stomatal lines of a true P. omorika and are more flattened than quadrangular. I suspect it is a hybrid, with either P. abies or P. sitchensis as the other parent. Nonetheless, it is a neat little tree ideal for its purpose.

Oh yes, that mysterious-sounding word omorika means spruce in Serbian, so the scientific name means spruce spruce, which, as one of the tidiest members of the genus, it really is.
Posted by John Grimshaw at 18:25