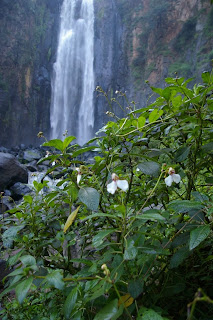 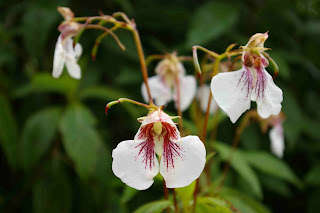 We had a sharp frost overnight, the first of the season to cause ice to form on the ponds. There was a light frost early in October that ruined the dahlias, but many other frost-sensitive plants had escaped serious damage until now. Among them were many of the Impatiens, which had continued to flower until they froze last night. One of them was Impatiens tinctoria, one of the largest species in this remarkable genus and one of very few plants from tropical Africa to be hardy outdoors in the British Isles. This hardiness derives from its tuberous roots, which can survive anything but the most penetrating frosts - and evidently the -12 degrees we had here last winter did not cause the soil to freeze so deeply. The rootstock looks like that of a particularly large and robust Dahlia, and was used in Ethiopia as a source of red dye, hence the epithet tinctoria. If worried about its survival a mulch can be used to help protect the roots, but most years this isn't necessary.

The succulent stems emerge in spring and usually grow in a British summer to about 1.5 m tall, possibly a little more if sheltered or very moist. As the season goes on they become somewhat woody and knobbly-kneed: in the wild they can evidently persist for some years as they get quite thick and the plants reach at least 3m in the best conditions. The leaves are large and dark green, but not particularly exciting. Above them hover the large flowers, white with red markings towards the centre. The most conspicuous part of the flower is actually the two lower lateral petals, which are greatly expanded into butterfly-like wings, while the other petals are rather small and insignificant. The upper petal, however, extends into a spur of varying length, which curves down behind the flower. This is presumably probed by nocturnal moths in search of nectar; I am not sure whether it does produce nectar, but the flower is strongly and sweetly scented (though suggestive of cheap soap), especially in the evening.

The plant has been in cultivation for many years. I first knew it as a large plant growing by one of the old greenhouses at Wisley in the early 1980s. It seems certain that it was from the stock introduced by Patrick Synge in the 1930s from his expedition to Uganda (written up in his book Mountains of the Moon), although I believe he collected it on Mt Elgon. This stock has larger flowers and longer spurs than those of plants I've seen at various localities in Kenya, and is therefore much more garden-worthy, but like them is regarded as subsp. elegantissima. We saw I. tinctoria in a couple of localities on our recent safari, firstly on the banks of the Wanjohi river in the so-called 'Happy Valley' and then in the gorge below the spectacular Thomson's Falls at Nyahururu (pictured here). It always grows where its feet are wet: a few yards upslope at Thomson's Falls it is replaced by the much more drought-tolerant I. sodenii. The close-up image was taken a couple of years ago on Mt. Kenya.

Unlike most Impatiens it seems to be reluctant to produce seed so it doesn't spread itself about, at least in this country. Propagation is easiest by taking short side shoots as cutings, with a bit of a heel. They root easily in water or a suitable light compost in a propagator.
Posted by John Grimshaw at 18:12