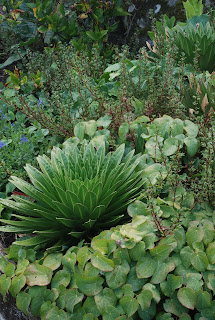 One of my regular sources of plant news and information is the excellent Pacific Bulb Society (PBS) discussion group which, despite its name, draws its members from all over the world. (Further information is available here http://www.pacificbulbsociety.org/list.php). One of its great contributions to plant knowledge is the member-maintained PBS Wiki, with a vast coverage of all sorts of bulbous plants - well worth browsing, or using if in search of information (http://pacificbulbsociety.org/pbswiki/index.php/HomePage).

Although all British gardeners are convinced that they have a particularly challenging microclimate, the British climate is, in broad terms, rather uniform across the country. In consequence gardeners from, say, Dorset and Derbyshire, are able to discuss a plant's requirements and hardiness on more-or-less equal terms. This is not so easy on the PBS list, where Californians, Australians, Scots and Italians may each be attempting to cultivate the same species in widely varying conditions. In consequence one has to try to make sense of information provided and balance it with personal experience and the local climate.

Recently, one of the topics for discussion has been the comparison of climates around the world and this morning saw the arrival of a post by Michael Mace (from California) introducing the group to a useful website
http://www.weather.com/outlook/travel/vacationplanner/compare

This is meant to enable travellers planning a trip to work out what the conditions might be like in their intended destinations, but it is also a very handy tool for the curious gardener. I've been playing with it this afternoon and although it has limitations - only major cities are covered, and not all of them - it is rather interesting as a quick and easy way of visualising meteorological conditions. Assuming there is coverage, graphs are presented comparing average maxima and minima (separately)and mean monthly rainfall. I checked London against various locations and was reminded that despite its reputation, it is drier than a great many other places, often considerably so (but that still doesn't mean it has great weather). Two parts of the world were easily found to be climatically comparable at this broad scale: the Pacific Northwest around Seattle and Vancouver, which both have average temperatures only 1oC higher than London's, but respectively their average rainfall is 388 mm and 582 mm above London's mean. This congruity is quite well known among gardeners, but the other may be less so. Hobart in Tasmania differs by being warmer by 2oC, but has on average a mere 6 mm more rainfall than London. However, unlike in the Pacific Northwest (where there is a distinct summer dry period), this rainfall is spread fairly evenly through the year, just as it usually is in the UK. This is, inevitably, a rather crude comparison of climatic similarity - those microclimates are indeed important - but it is nonetheless interesting.

Gardeners in Tasmania evidently have a really remarkable climate, being able to grow all the British favourites but with a lot more besides. This results in some remarkable combinations, as shown in this photograph by Eric Hsu, of Lobelia keniensis and the shrubby Alchemilla argyrophylla growing with an Epimedium. Here the two Afroalpines would have to be cossetted under glass to have half a chance of surviving.
Posted by John Grimshaw at 18:34