A new species of plant 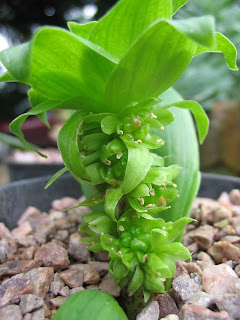 The latest online issue of the journal Plant Systematics and Evolution includes the paper by Ben Zonneveld and Graham Duncan:
'Genome sizes of Eucomis L’Hér. (Hyacinthaceae) and a description of the new species Eucomis grimshawii G.D.Duncan & Zonneveld'. It can be found online at http://www.springerlink.com/content/p15q504182v6r573/fulltext.pdf

Although the name is not strictly published until it appears in the printed journal (early next year), this is the first public announcement of the name and discovery of Eucomis grimshawii - exciting news for me!

The genus Eucomis is found only in southern Africa from the western Cape (E. regia) to Malawi (E. zambesiaca) but mostly in South Africa. Zonneveld & Duncan recognise twelve species, of which several (such as E. bicolor and E. comosa, are well-known cultivated plants of stately presence in the summer border. Eucomis grimshawii, however, would never win any prizes for beauty, being the smallest and least attractive member of the genus. It is short (8-10 cm tall), with a dumpy inflorescence of green flowers sheltering under a topknot of floppy bracts.

It was found on an Alpine Garden Society Tour of the Drakensberg in January 2002, growing in damp ground among clumps of Kniphofia caulescens, just below the only South African ski resort, Tiffindell, at about 2700 m. On the tour we had already seen a number of Eucomis - E. autumnalis, E. bicolor, E. humilis, and E. schijffii. It didn't match any of them, though seemed closest to the high-altitude species E.schijffii. But this has purple-tinged foliage, flowers and bracts, whereas the Tiffindell plant is all green. It didn't tally in other characters either, nor could anything be found to match it in the literature.

Seeds were collected for me later that year. The seedlings proved to be very dificult to grow, but one finally flowered in the summer of 2008 (see the picture above). This enabled a comparison of this plant with other species, including E. schijffii, and a table of characters was drawn up to show how they differ. This convinced me that it was a completely different species, Graham Duncan from Kirstenbosch Botanical Garden agreed, and roots sent to Ben Zonneveld in Leiden showed that the species had a different nuclear DNA weight to any other species. about a year ago Cameron McMaster was in the vicinity of Tiffindell and was asked by Graham to look for this plant. He found it there and one of his specimens now forms the type specimen, preserved in the herbarium at Kirstenbosch. I am extremely honoured to have had this plant named after me.
Posted by John Grimshaw at 19:29