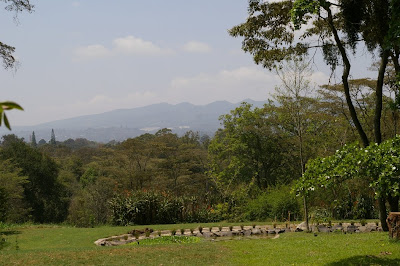 Among the shrubs flowering while we were there was a Calliandra, covered in pretty, powder-puff like clusters of pink flowers, and another legume, Cadia purpurea, whose most un-legume-like flowers open creamy-white and turn pink. In the ponds blue waterlilies (Nymphaea caerulea) were surrounded by Water Hyacinth (Eichhornia crassipes) and the floating fern Salvinia. This looks lovely with raindrops held on its water-repelling hairs, but both of these plants can be serious pests of waterways.In ecological contrast was a hedge of a native Aloe, flowering magnificently and being visited by dozens of sunbirds.
Posted by John Grimshaw at 16:45