Although I went to Belgium at the weekend for the snowdrop event at Arboretum Kalmthout - more on that soon - I took the chance to see the justly famous Hamamelis collection in the arboretum too. Witch-hazels have been grown at Kalmthout since the 1930s, when Antoine Kort started growing seedlings in the then nursery, but its fame developed after Robert and Jelena de Belder began to grow seedlings from 1954 onwards, releasing the first selections in 1969. Since 1993 the arboretum has been owned by the Province of Antwerp, and the 'Hamamelisfeesten' (festival) is an important feature in its calendar, allowing visitors to enjoy big, mature specimens such as are seldom seen elsewhere. With many of them growing in 'glades' between other trees, and with numerous conifers as backdrop to their colours they are particularly well displayed. It was a cold day, with snow lying in patches, so unfortunately the scent was not very noticeable, but this hardly diminished the pleasure. All the named plants shown are cultivars of Hamamelis

× intermedia, with other images showing the sumptuous massed banks of assorted cultivars. 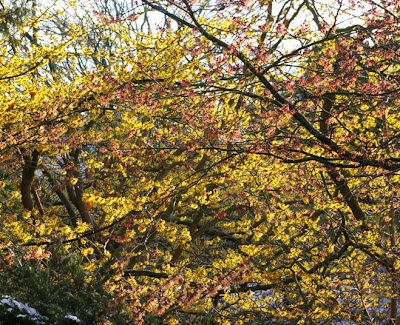 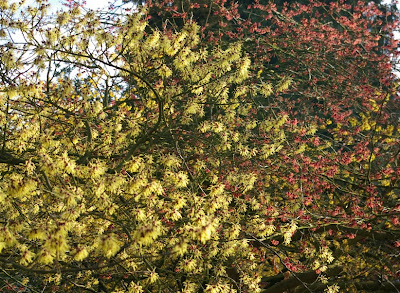