'For Galanthophiles', and the 'Daffodil, Snowdrop and Tulip Yearbook 2011' 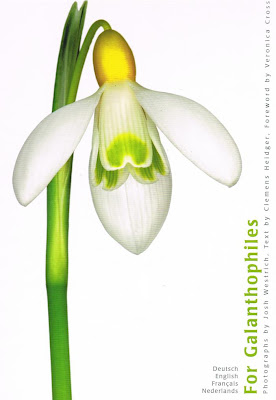 I was recently sent a copy of For Galanthophiles, a beautiful collection of ph﻿otographs of snowdrops by Josh Westrich with text by Clemens Heidger, gathered into a substantial book. As in the earlier book 'Helen Ballard, the Hellebore Queen' by Gisela Schmiemann, Josh Westrich's photographs are displayed on a white background and gain great vivacity from this. A selection was exhibited at the RHS Harvest Show last year and was curiously given only a Silver Medal, as they are the most striking images of snowdrops I have yet seen, and deserve recognition as such. The text, which is presented in columns in no less than four languages (German, English, French and Dutch) is idiosyncratic and personal; its statements should be treated with caution in places, and nomenclatural convention has gone astray. But this is not a book to obtain for the text - just enjoy the superb photography.

Far more valuable as a long-term reference will be the content of the Daffodil, Snowdrop and Tulip Yearbook 2011, just published by the RHS. This is one of the most useful of annual publications, always packed with interesting articles on its three subject groups - though it's interesting to see how very much to the fore snowdrops have become in its pages. This issue contains a particularly important article by Matt Bishop, establishing the concept of the 'inverse poculiform' snowdrop - illustrated with his characteristic photographs of flowers against a black background, precision-poised to show off the vital features of each flower's markings, but losing nothing of their beauty thereby.
I hear the cries, 'What is an 'inverse poculiform' snowdrop?' and why is it important? Poculiform snowdrops have been known since the Nineteenth Century, when the name 'Poculiformis' was coined for a form of Galanthus nivalis in which the flower was composed of six equal, all white segments, equating to a replacement of the normal inner segments by another set of outer segments. I posted about them in March 2010. In recent decades, starting with the famous G. plicatus 'Trym' a whole series of snowdrops - in several species and hybrids - have arisen in which the flowers are composed of six equal segments showing green marks and often an apical notch: in this case the outer segments are effectively replaced by a whorl of inner segments. This inversion of the traditional poculiform flower form has never been recognised by a formal name, until now: the concept of an 'inverse poculiform' will enable us to communicate much more effectively about these often very charming plants.
For galanthophiles, the 'Daff Yearbook' (as it is often called) also contains a piece by Hanneke van Dijk on her classification scheme for snowdrops, a review of her book Galanthomania by Alan Leslie, Joze Bavcon on Slovenian snowdrops and a nice article by John Blanchard on Leucojum and Acis, as well as reports on plants exhibited at shows around Britain in 2010-11. Daffodil matters are well covered too, ranging from considerations of the wild species and miniature hybrids to the latest exhibition bloms, including the remarkably greenish 'Mesa Verde' illustrated on the cover. The Daffodil, Snowdrop and Tulip Yearbook is an important annual work, published at a loss by the RHS and therefore constantly under threat (its parent Daffodil and Tulip Committee is indeed being terminated in the near future, though it will be resurrected in a new guise). It deserves support and I urge anyone interested in any of (though I hope it will be all) the three genera concerned to buy a copy - at a cover price of £11.95 it is excellent value.
Posted by John Grimshaw at 22:59