Inspired by seeing them in the wild and in cultivation at the Cape, I attempt to grow a few South African bulbous plants, with a particular interest in the wonderful diversity of Cape Iridaceae. In the single-regime greenhouse available here they are not all perfectly happy, as it is probably not really light and airy enough for them, and I often wonder why I bother with these scrappy pots of thin foliage. Then they flower and all is forgiven. These are a few that have bloomed recently.


As regular readers of the Diary may recall, I am very fond of Gladiolus and it's particularly exciting when a new one flowers. This is G. huttonii, an Eastern Cape species, currently flowering here. The seed was obtained from the seed room at Kirstenbosch in 2004, but inexplicably not sown until August 2006. It is an interesting little plant (this specimen is about 20 cm tall), with flowers apparently adapted for bird pollination (red coloration, long tube), but it is so flimsy it is difficult to imagine a sunbird being able to perch on it. It and some of its relatives were formerly placed in the genus Homoglossum on account of the floral differences, but they were long ago sunk into Gladiolus. The only remembrance of the name Homoglossum in horticulture is in the so-called 'homoglads', the rather amusing name for hybrids between the former Homoglossum watsonium (now Gladiolus watsonius) and Gladiolus tristis, but probably also including G. huttonii, which form a swarm of elegant, attractively coloured plants ideal for early flowering in Mediterranean climates or under glass further north. Julian Sutton, proprietor of the very aptly named Desirable Plants nursery, is breeding within the group in search of cut-flower potential and brought a batch of his rejects to the Alpines without Frontiers conference last week. Rejects to him, perhaps, but manna to everyone else, and his table was cleared of them in about ten minutes. I helped.
﻿ 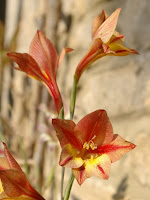 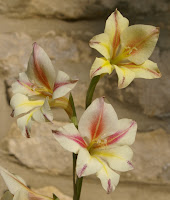 ﻿
Two of Julian Sutton's hybrids
Posted by John Grimshaw at 09:42