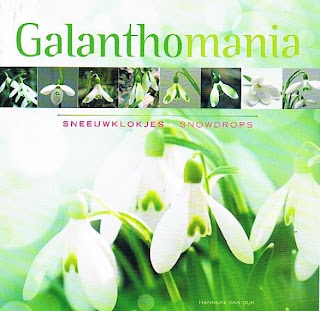 Thanks to a train journey to London yesterday, I've finally had chance to read through Hanneke van Dijk's book Galanthomania, this season's contribution to the snowdrop literature. It develops the theme of her earlier book (with Gert-Jan van der Kolk) Sneeuwklokjes, investigating the fascination for and of snowdrops. Sneeuwklokjes is entirely in Dutch, whereas Galanthomania, no doubt with an eye on broadening the market, is bilingual, with Dutch text on the left of the spread and an exact translation into good English on the right. This works remarkably well, especially as the photographs are spread impartially across the pages. As usual with Hanneke's books these are a mixture of the informative and quirky, with some acutely shot images catching the spirit of the snowdrop season (though they are perhaps not quite as charming as in Sneeuwklokjes). The book is very well designed, and the images have reproduced well though printed on matt paper.

About half the book is given over to portraits, photographic and written, of prominent galanthophiles, and I think this where the book has real value, capturing glimpses of personalities through the eyes of a perceptive observer. Enthusiasts from across northern Europe are portrayed and given voice (although some portraitees have noted that the words are not always direct quotes), but there are some notable omissions: John Morley, whose North Green Snowdrops is the patriarch of catalogues, is missing, and it would have been nice to have seen non-European enthusiasts represented too. One can think of Hitch Lyman, who has almost single-handedly supplied choice snowdrops to Americans for years, and Tomoko Miyashita, who flies the flag in Japan: both are prominent annual visitors to the European snowdrop season. What comes out very strongly in the text is how so many galanthophiles have been mentored in their enthusiasm by members of an earlier generation: among them Herbert Ransom (always spoken of in the warmest tones), Primrose Warburg and especially Richard Nutt, who had a huge influence on many of us.
﻿﻿

In the first part of the book Hanneke propounds a classification scheme for snowdrops based on flower shape and markings, claiming that enthusiasts focus predominantly 'on the flowers rather than the leaves.' The result is ten new groups into which, it is claimed, all snowdrops can be fitted. Perhaps so, but such an approach is so broad-brush as to be of very minimal value in identification, and full of ambiguities and difficulties where the markings or flower shape do not accord with the simplistic definitions provided. For example, as I read the definitions, any snowdrop of normal flower shape displaying a single mark of any shape on its inner segment, is placed within the Imperial Group. This means that flowers with markings as diverse as those seen in (e.g.) the well-known cultivars 'S. Arnott' (a simple "inverted v"), 'John  Gray' (a diffuse X) and 'Merlin' (largely solid green) are lumped together, though they have no physical similarity or relationship whatsoever. The scheme may work better for smaller, more easily differentiated assemblages, but is riddled with ambiguities; 'Comet' which, like many other G. elwesii selections, sometimes has green markings on its outer segments (placing it in the Green Group: "outer segments significantly, or even just slightly, green") but often doesn't, is placed by the author in the Imperial Group. Or does an albino like 'Sibbertoft White' migrate to the Twomark Group if small markings are sometimes evident? (Fortunately there is no Primark group...). Vast, all-inclusive Cultivar Groups of the sort proposed have no practical use in either accurate identification or understanding of snowdrop cultivation. The unwarranted introduction of new names for these ill-defined units is not helpful either: many ignore the long history of galanthophilic usage that is so much part of the charm the book otherwise portrays.
The failure to recognize that leaves are a fundamental part of a snowdrop's identity and, even more importantly, its effect in the garden, is regrettable. Looking only at flowers tells you nothing about the plant's appearance or its garden merits, as well as concealing the fact that snowdrops of different species or parentage have different cultivation preferences. The gallery of 500 images at the back of the book is all of disembodied flowers, against varying backgrounds, and while interesting and the source of the first published illustration of several cultivars, emphasizes that one needs to see the whole plant (or at least know what to expect) for any sort of identification to be accurate.
﻿﻿
﻿﻿Galanthomania is actually a very pleasant book, which all galanthomanes will want to possess, and will enjoy - just don't pay too much attention to the classification scheme.