﻿
﻿I grow thousands of different plants in this garden, so choosing one as plant of the year is quite invidious. However, looking back through the year's images there was one clear winner - the pure white Papaver somniferum. For impact and beauty it was outstanding, with its big white blooms floating above the new growth in the new border - elegant and refined yet absolutely simple. The seed came from Sibylle Kreutzberger, who told me the story of its origin earlier this year. When she and Pam Schwerdt were at Sissinghurst they wanted a white poppy for the White Garden, but could not locate any through the normal horticultural sources. They had seen pictures of fields of white poppies in Afghanistan, so knew they existed, but how to get seed? Eventually they obtained seed from the local baker, who would otherwise have sprinkled bread with it, and from it grew perfect white poppies, of which these are direct descendants. 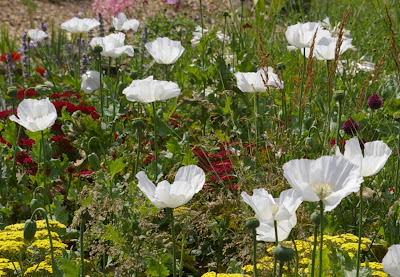 Reminiscences of 2011: the cottage garden

For the first time since starting this diary, we have an old-fashioned mild and green British Christmas - thank goodness! The mild weather - it has been up to 12o on several days this week - has brought on a lot of flowers prematurely and there is quite a diversity to be seen. These have been flowering in the open garden at Colesbourne during the past week:


May your festivities also be fun and floriferous!

A tree at Christmas

Posted by John Grimshaw at 18:44 No comments:

Among the many gardens I saw on my American tour in September one of the most captivating was that of Silas Mountsier in Nutley, New Jersey, an acre of fine design and solid structure, with the summer planting being almost entirely in shades of green. In creating the garden Silas has been assisted for nearly twenty years by Richard Hartlage - he of the wonderful Calycanthus x raulstonii 'Hartlage Wine', bred in his time at the then North Carolina State University Arboretumn (now JC Raulston Arboretum), and with a solid background in real gardening, but now a landscape architect based in Seattle. The collaborative result is delightful: exciting yet peaceful at the same time. The garden has been much written about, as a web search will show. Here are a few pictures that I hope capture something of its charm and the attention to detail that has gone into it.

﻿
Remarkably, however, the Mountsier garden is one of a pair. His partner, Graham Hardie, has his own house across the street, and here he and Richard Hartlage have created another remarkable and beautiful space. In this case, however, the planting is in vibrant colours and textures from flowers and foliage - though all combined with remarkable touch. Lushness there is, but it's not overwhelming and although bright it's not gaudy: the planting is controlled by strong lines and structural shapes that prevent it from becoming just a jungle. Though very different, the two gardens, like their owners, complement each other and make a great couple. I thank Silas and Graham for a lovely afternoon.

﻿﻿﻿﻿﻿Kim Blaxland, who has died aged 70, was one of the foremost experts on the genus Viola, developing her interest as an amateur to a high degree of competence, publishing technical papers as well as horticultural articles, and with her expertise sought-after by others. She travelled all over the world to see and study violas in their native habitats: one of the highlights of her botanical career was her discovery of a new species of Viola in Turkey and her publication of it as Viola dirimliensis Blaxland, in no less than the Botanical Journal of the Linnean Society (2004).﻿﻿
﻿﻿
﻿﻿I got to know Kim when she joined an Alpine Garden Society Tour of the Eastern Cape, led by Dave McDonald and myself. She had come out to South Africa early especially to see Viola decumbens, the only species in the Western Cape, which she saw at the Fernkloof Nature Reserve near Hermanus.  Her quest attracted the attention of the local media, and an article about her visit is available online. On the tour she was huge fun and extremely enthusiastic about all sorts of plants. In the small town of Nieuwoudtville, where accommodation is limited (tourists only go there in flower season) she and I shared an apartment loaned by - we presumed - an elderly lady. It was a 'Marie Celeste'experience as it looked as if the owner had gone out by the back door as we came in. In common with others in similar situations we found that the toilet seat was covered by a knitted cover, an amenity we found rather repellant, so promptly took it off.

We met up once again, in Pennsylvania, where she lived with her husband Chris, a vet, having emigrated from Australia (Eucalyptus blaxlandii is named for a connection of the family) - they remained very much Aussies at heart, with their family living there. Sadly she developed pancreatic cancer and fought it for several years but lost the battle about ten days ago. She was one of those people I should have loved to have known better and seen more of, and regret that that opportunity has now passed.

Back in October, when I cleared away the tomato plants there was no time to turn the remaining fruit - reddish or still green - into chutney as I'd normally do. So I roasted them for a bit in the oven, then froze them away: now, needing freezer space, I've spent the evening realising their destiny. It's a long, hot process, reducing a pile of mixed fruit and veg into something that one hopes will be both tangy and semi-sweet. This is the recipe I usually use, with proportions expressed in parts:
﻿ ﻿
2 parts tomatoes (green and red)
1 part chopped cooking apple
1 part diced onion
0.5 part sultanas (didn't have any today, so I used chopped-up dates and dried figs)
1 part soft brown sugar
sufficient vinegar to boil it all in
a teaspooon or two of chili flakes
2 big garlic cloves
a lump of root ginger, grated
2 tablespoons of mustard seed
salt

Tonight I used, by mistake, equal parts of tomato, onion and a mix of rhubarb and apple - luckily the proportions are not really crucial. The pan needs a lot of stirring, and I hasten the reduction process by scooping out excess liquid from the surface with a gravy ladle - this liquor is also bottled and makes a tasty ketchup. The result is perhaps a tad too sweet, but it's very tasty and will be great with a strong cheddar or well-flavoured ham.

The most high and palmy state of Rome

It's the time of year - especially on such a horrible cold, wet and windy day, with the first snowflakes of the season coming down - to reminisce about warmer times and happy days in the sun, so this is the first of a few posts, catching up with things I missed earlier.


When we were in Rome in August I thought that an interesting theme would be to photograph palms - Roman pines being somewhat overdone - and to see what species were grown outdoors there. The selection proved in fact to be quite limited, and no more than might have been tried by adventurous British gardeners in the early and mid 2000s (we didn't visit any botanical gardens, where there might have been a wider diversity). The difference is, however, that all these species were thriving rather than lingering, and in the hot sun and around fine buildings they are seen to their best advantage: a Phoenix shivering by the Thames does not have the same presence as one by the Tiber. Here are a selection of pictures, hopefully conveying something of this.
﻿
﻿
﻿﻿﻿
﻿﻿The title of this post is a quotation from Hamlet, and as I learnt from A.N. Wilson's engaging book, The Elizabethans (2011), it is an example of hendiadys, the coupling together of two words to make one sense. It was a usage that took root and flourished in 16th Century England, with Cranmer's prayer book ('erred and strayed', 'devices and desires', 'to have and to hold') and Shakespeare's plays ('slings and arrows', 'lean and hungry', 'wasteful and ridiculous') being particularly rich in hendiadys: they make for euphonious reading and the English language is greatly enriched by them. Hendiadys - when one looks for it - is everywhere. I see that, unconsciously, one has crept into the first paragraph ('wet and windy') and, more appositely, Kipling's 'dominion over palm and pine' is another.
﻿ ﻿